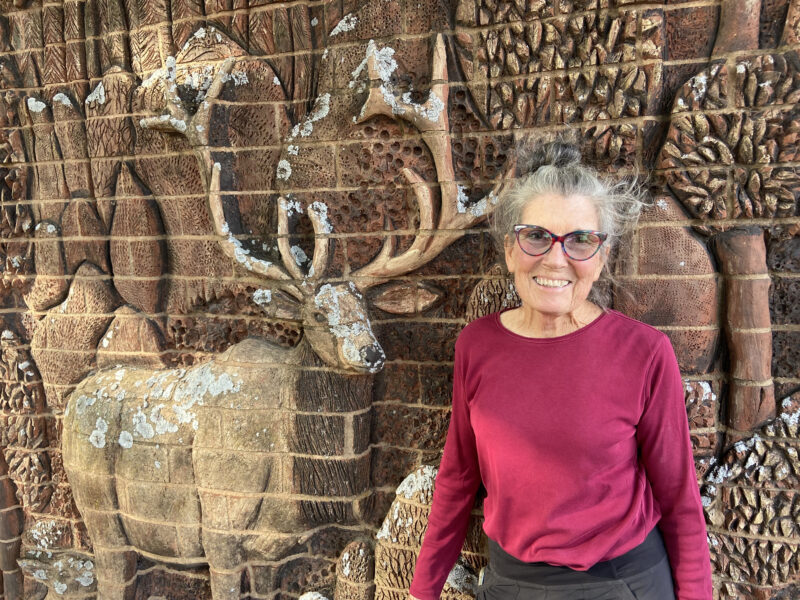 Paula Blincoe has been many things over the years—an artist, a mother, and a pilot, to name a few—but now she is living out her childhood dream at the family farm near Hiattville.

“I’ve dreamt of being here since I was two years old,” Blincoe said. “I feel potential here.”

Blincoe grew up in a number of places owing to her father’s federal government service. She was born in Texas and spent her formative years in Michigan.

But her deepest roots have always been at the Blincoe family farm near Hiattville. As a young girl, she loved spending time on the farm with her grandparents.

“I was helping my grandmother feed the chickens, and she said, ‘Paula, you’d be a great farmer!’,” Blincoe said. “I put my hands on my hips and said, ‘That’s what I’m going to be!”

But she also felt a pull toward art. Blincoe says she was inspired by her uncle Jim Howard, an internationally renowned fashion illustrator who was hired by Nieman Marcus right out of college.

“I will forever be intimidated by his drawing ability,” Blincoe said.

Blincoe explored many types of art at the University of Iowa in the early 1970s. At one point she enrolled in a ceramics class because it was the only one that worked with her schedule as a part-time receptionist at a beauty salon.

“I walked in, they handed me the lump of clay, and it was like all of my questions were answered,” Blincoe said. “It was right there. I felt a charge go through me.”

After graduating college in the early 1970s, Blincoe moved into the old farmhouse in Bourbon County, which was owned by her father George but had been uninhabited for decades. She set to work on turning the old chicken house into her clay workshop.

Blincoe formed and fired hundreds of pieces of pottery, selling them at a shop she operated in downtown Fort Scott. The business was a success.

A chance meeting at an art show in Tulsa connected Blincoe to another artist who asked if she wanted to work on a larger scale. He referred her to an Acme Brick salesman and architect who was looking for an artist to work on a big project in Oklahoma.

That led her to move to Tulsa and work on her first large-scale commercial project: a 10-foot by 84-foot brick sculpture. Bas relief in brick became Blincoe’s signature style.

Ever the astute businesswoman, Blincoe is quick to point out that her process begins with a signed contract; then she gathers input on what her clients hope to see.

Next comes a sketch laying out all the elements. After the sketch is approved, she makes a temporary wall out of plywood and tips it back just far enough to carve and stack the unfired bricks, using clay to keep a temporary space where the mortar will go when finished.

The carved bricks are marked with coordinates indicating their place in the grid, sent to a brick factory for firing, and packaged and sent to their destination, where they will be installed by a mason in their permanent home.

By any measure, Blincoe has had a long and successful career in art. Her sculptures—she “lost count after 200”—can be seen in more than a dozen states. But when she inherited the family farm a few years ago, she knew it was time to come home.

Blincoe is not looking for work. She’s not quite sure what the future has in store—perhaps she will open her workshop to others for lessons, or perhaps she’ll plant a special crop to sell to a farm-to-table restaurant—but in the meantime, she’s content to enjoy living in the 150-year-old barn that has been converted into a one-of-a-kind home, and visiting her workshop to sculpt and fire her ideas into works of fine art.